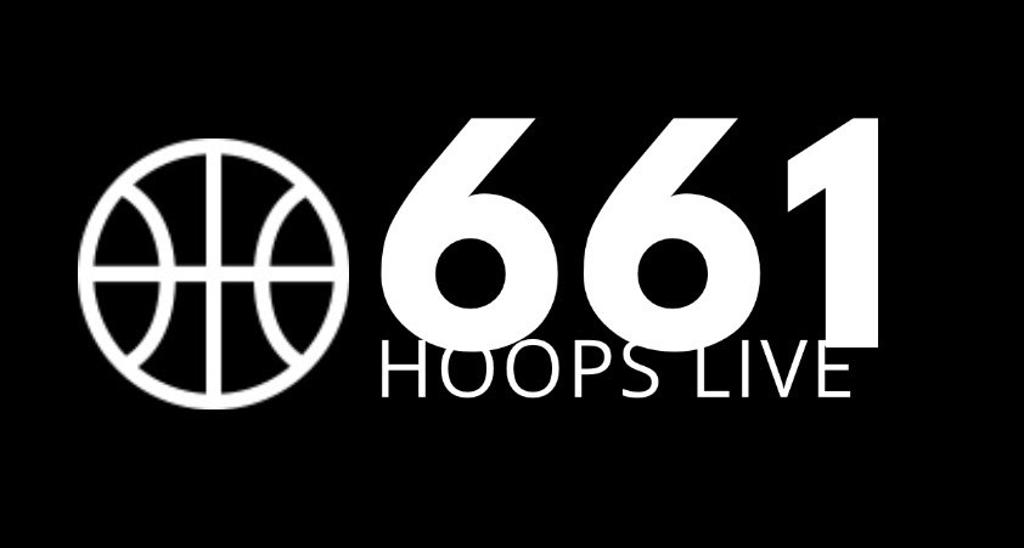 This last Sunday, January 10th, I attended the Hoops 2.0 League that featured some of the top high school prospects in Southern California. I was able to watch most teams play and the article below features player evaluations for eight prospects that had standout performances. Part 2 of this article will follow shortly. 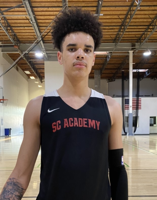 SCA Prep, led by Coach Julius, has assembled an elite roster that has competed against some of the top talent in the nation. One of those players that really had his game and skill on display at the Hoops 2.0 League was Eastern Washington commit Skylar Wilson. Wilson had it going from deep early in SCA’s 1st game, connecting on a pair of 3s and showing his range. Wilson showed good movement off the ball, combined with his ability to rise up on his jump shot, creating a lot of space for catch and shoot opportunities. Wilson’s ability to spread the floor opens up lanes, which proved deadly for defenders. Once his defender had to crowd the 3 point line, Wilson used his handles, perimeter moves, and superior athleticism to get into the lane and attack the rim with ferocity. In SCA’s 2nd game, Wilson had a few transition dunks that further highlighted his bounce, one of them a nasty windmill. Wilson is an impressive wing/slasher that keeps the defense on their heels and his ability to stretch the floor makes him a threat on the offensive end. Defensively, Wilson has great size and length to disrupt passing lanes, alter shots and get rebounds to push the pace in the open court. Really nice get for the Eagles.

This was the first time I had seen Phillips live and the East Coast Native was deep in his bag at Hoops 2.0 Winter League. In Team Elev8’s 1st game, Phillips had his way against Middlebrooks Academy. In the game of the day against SCA, Phillips single handedly kept Elev8 close and put on a scoring clinic in the 2nd half. Phillips had a run where he hit multiple deep stepback 3s, used his crafty handles to slither through the defense for creative finishes at the rim, and connected on his mid-range jumper frequently, as he finished with a game high 27 points. Phillips has elite ball handling skills, great body control with the ability to finish through contact at the rim, really sees the floor well in the open court and half court settings, has lock up capabilities on defense and reads passing lanes nicely, and is a high impact 3 level scorer. Impressive prospect. 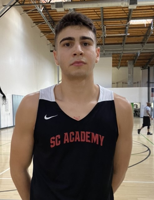 The lead guard play for SCA was done at a high level at the Hoops 2.0 Winter League. Coach Julius has multiple options at the point guard position and they all played very well this past weekend. Shtolzberg may have played the best as the lead guard, and that is saying something given Yaru Harvey and newly acquired Donjae Lindsey played very well in both games. Shtolzberg controlled the pace of play, hit timely shots, created opportunities for others as a playmaker, very creative shotmaker, and knowledgeable about the game as a floor general. Shtolzberg has a physical build at the lead guard spot, good control of his handle, surveys the court nicely, gets into his defenders body with crafty finishes at the rim, gets to his spot off the dribble with a nice jumper, and was impressive leading the offense. On a team with a lot of talent, Ben found ways to get others involved as well as look to create on his own. Holds offers from Northwestern, Pepperdine, Nebraska, Boston College and UC Santa Barbara. 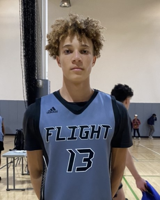 I was fortunate to have seen Brickner play a few weeks ago at an OC Night Private Run and was very impressed with multiple aspects of his game but wanted to see him in an organized game format. West Coast Flight faced two tough opponents at Hoops 2.0 Winter League, Cali Rebels Elite and SCA, but Brickner had a really solid showing against future D1 players on both opponents’ rosters. Brickner is a very intriguing prospect that does a lot of things well and is flying way under the radar as a prospect. Brickner has a great feel for the game and has good control of the pace of play with the ball in his hands. A true combo guard, Brickner plays well on and off the ball at either guard spot. At the point, Brickner is poised, has size to read over defenses, sees the floor well, makes good decisions off pick and roll plays, can create his own offense off the dribble, and is effective from beyond the arc. Brickner also plays well off the ball, using off ball screens, finding gaps in the defense, does a great job on the glass with superior leaping ability, and really excels on the wing in the open court. Brickner is also a good verbal leader on the court. A lot to like about Brickner and as a 2021 player with limited exposure due to Covid, I think a year of post-grad could be big for a player of this caliber. Impressive in open run and organized game format.

Carr is another player I have been fortunate to see play a few times over the past month, at the OC Night Runs and more recently at the Hoops 2.0 League, displaying an ability to score in numerous ways with a high level of basketball skill. As a 2-guard, Carr shows great ability to create his own offense, with dynamic ball handling skills, the moves and combos to generate separation from his defender, and is a creative shot maker from numerous spots on the court. I have found Carr’s development as a lead guard, with the skills needed to play at the point, truly makes him a problem for defenses to contain. Against Cent City, Carr displayed his strengths in various aspects of his overall game. Carr scored from all 3 levels, sliced through the defense with his tight yet elusive handles, used his physicality to get into the paint and finish through or around contact, and routinely knocked down his pretty one foot midrange shot. Carr recently decided to depart from St. Bernard HS and at the moment I am not aware of where he will attend moving forward. The school that gets Carr will be getting a true combo guard that is one of the top 2023 players in California, if not the West Coast. 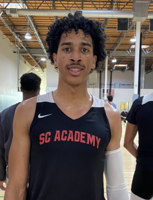 SCA has a very talented roster and great guard play that was on display at the Hoops 2.0 League. Although Coach Julius has great options to run at the point guard position, Harvey is the most complete lead guard for the Rams. Harvey is no stranger to playing alongside elite next level prospects, being part of a loaded Sheldon squad in previous years and now with the very talented SCA Prep National Team with multiple D1 teammates. Although this can hinder the performance of a lot of high school players, Harvey’s skill set and understanding of the game allow his strengths to shine against some of the top talent in the nation, as SCA plays in the infamous Grind Session League. In a tough fought win against Team Elev8, Harvey had it going in multiple facets of the game. Harvey rebounds very well for his position and this allows him to control the ball and get into transition offense to make plays. Multiple times Harvey got the ball off misses and displayed his superb court vision finding teammates in stride off full court passes for easy transition baskets. Harvey has the capability to score from various spots on the court, as he connected from beyond the arc, from the midrange and at the rim. Harvey is a true floor general, has the confidence and poise to run a high level college system, has really good handles and keeps the ball on a string, displays great vision surveying the opposition, is a high level playmaker keeping teammates involved in the offense, high basketball IQ, and has exceptional leadership characteristics. Harvey plays with a relentless motor and will be a great addition for Eastern Washington, as he will be joining the Eagles with fellow SCA teammate Sylar Wilson. 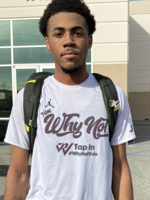 One of the better individual performances at the Hoops 2.0 League this past weekend came from Cent City’s senior guard, Josh Smith. Smith was in his bag in Cent City’s 2nd game against a talent squad with Darius Carr, Brady Dunlap, Lorenzo Marsh and Xavier Edmonds. Smith showed a lot of versatility in his all around game and was highly effective when the ball was in his hands, either making plays for others or creating his own offense. Smith had a game high 20 points and kept pressure on the defense throughout the game. Smith handles the rock nicely; uses his length, perimeter moves and quick 1st step to get by his defender; has creativity on his finishes around the basket; flashy passer in traffic while remaining under control; and plays with great pace and controls the flow of the game. Defensively, Smith brings the intensity, has active hands, and was able to read passing lanes well to create easy offense off turnovers.

The Hoops 2.0 League had a lot of talent and high level prospects in the facility this past weekend, and one of the most impressive underclassmen was the tall and lengthy Brady Dunlap. Dunlap had a very impressive showing against Cent City, and showed the shot making ability and range to score from various spots on the court. Dunlap has a really nice shooting form and at 6’7 he can get his shot off over perimeter defenders with relative ease. Even more impressive was Dunlap’s handles and moves to create off the wing and get into the teeth of the defense, with creativity on his finishes around the basket. Dunlap’s ability to stretch the floor opened up driving lanes and he made the defense pay by drawing fouls and getting to the free throw line routinely. Dunlap had a team high 16 points and has a good understanding of how to impact the game on both ends of the court. Dunlap rebounds well and also has the wingspan to alter shots at the rim or on the perimeter. Dunlap is a great pick-up for Harvard-Westlake and a rising D1 prospect on the West Coast. The people I have spoken with about his game have all raved about his upside and potential to be one of the top 2023 prospects moving forward.

Congratulations to Vic Saucedo of VCU on becoming one of the most impactful strength and conditioning coaches in th… https://t.co/hzbmHCPSPP

Congratulations to Tyler Janota of ETSU on becoming one of the most impactful strength and conditioning coaches in… https://t.co/y4XI7j2YO8

Congratulations to Travis Knight of Gonzaga on becoming one of the most impactful strength and conditioning coaches… https://t.co/76D5tIvKNu

Congratulations to Steve Englehart of Colorado on becoming one of the most impactful strength and conditioning coac… https://t.co/tTatUc8hHC

Congratulations to Shaun Brown of West Virginia on becoming one of the most impactful strength and conditioning coa… https://t.co/4jOIJ9hT9S

Congratulations to Ryan Metzger of Tennessee on becoming one of the most impactful strength and conditioning coache… https://t.co/0x2w56KPd9

Congratulations to Ryan Horn of Wichita State on becoming one of the most impactful strength and conditioning coach… https://t.co/KkHiLJEt34

Congratulations to Ryan Davis of Maryland on becoming one of the most impactful strength and conditioning coaches i… https://t.co/oOF2sbDHLU