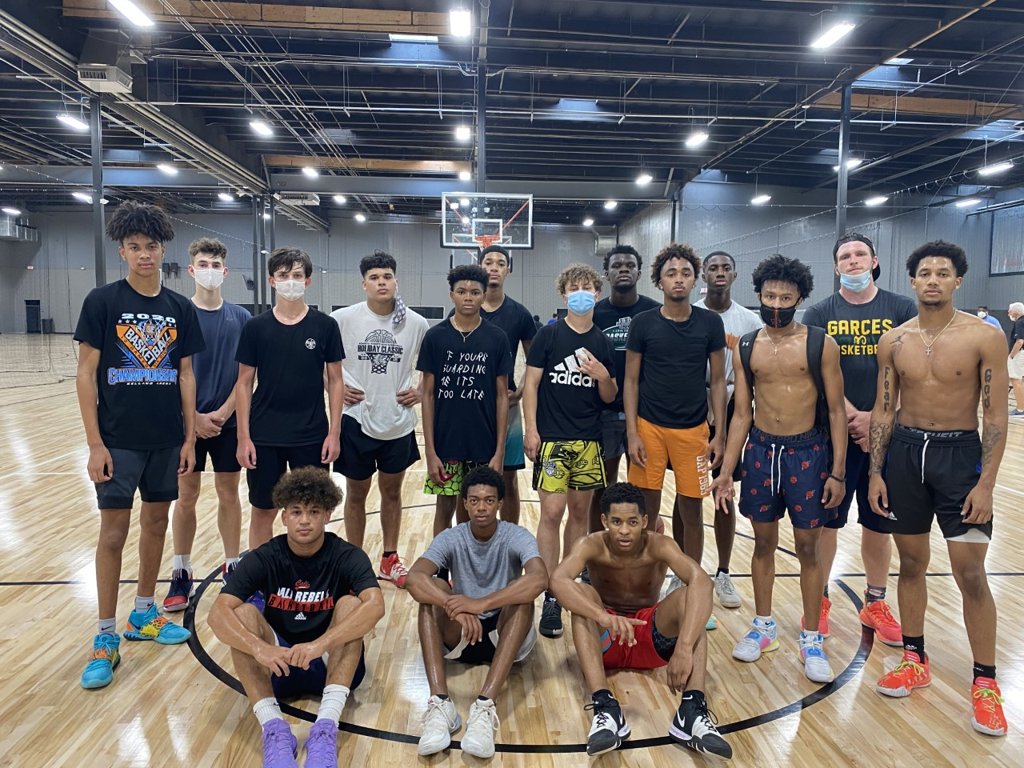 We just wrapped up 5 weeks of the Prospect Workouts with players coming from as far as Irvine (Southern California) and up to Turlock (Northern California). The purpose of these workouts is to provide exposure for players during a time that has seen players miss out on an entire AAU season, as well as individual player events. The following write-up is an evaluation of the players that have attended the Prospect Workouts. This is a multiple part series of evaluations, as Part 3 looks at  players that have attended the workouts over the past 5 weeks.

Brown is coming off a standout sophomore season and is one of the Top 2022 Prospects in the Central Section. Brown was awarded Player of the Game in the D2 Boys Central Section Championship game, finishing with 22 points and 10 rebounds. Brown has a unique skill set and is at his best when he is at the lead guard position with the ball in his hands. Brown has good ball handling skills, uses his height to see the court and makes really nice reads in the half court setting. Brown has a nice perimeter game and is able to go at his defender and make plays and reads as the defense collapses. Brown can score efficiently at all 3 levels, but really excels using his length and size with the Euro move. Defensively, Brown alters passing lanes, is a really good rim protector and is a high impact rebounder. Brown has interest from a few D1 programs (Washington State and Hawaii) and is looking to be the driving force for the Falcons this year and make a run for league MVP. MM D1 Prospect with the ability to be a HM Prospect.

Steinberg was a player that I had never heard of before the Prospect Workouts. As I have stated in the previous Prospect Workouts player evaluations, the beauty of these workouts is finding those players that have been under the radar in various parts of California. Steinberg made it to a few of the Prospect Workouts and I was able to get a good feel for his style of play. The first thing that stood out from Steinberg’s game was he is a true competitor in all facets of the game. Steinberg has good ball handling skills and controls the pace of play, keeps pressure on the defense by staying on the attack with a scorer mentality, and is capable of scoring at all 3 levels. Steinberg has great energy on the floor and shows great body language at all times. Although Steinberg looks to score, he does a solid job of distributing the ball and for play at the next level could be the lead guard for a college program. Very respectful youngman and he really loves to be on the court and compete. NAIA/High Academic (D3) Prospect but could make a D2 roster.

Francis came to the Prospect Workouts with his cousin, Jaylen Randle, and his skill set caught my attention as soon as the skills portion of the Workouts started. Francis did not waste time showing his skill set during 5 v 5 play. Francis has really solid moves to create space or get by his defender and makes good decisions when on the attack. Francis has a really good quick crossover move that he uses effectively to get into the teeth of the defense and great body control when on the move with the ball. Francis also does a nice job of creating contact with the ability to finish through or around the defender. The most impressive part of Francis’ game was his court awareness and control of the tempo of play with the ball in his hand. Surveys the defense and has a great deal of confidence in his abilities. Francis has a good feel for getting to his spot and creating scoring opportunities. As Francis looks to have a standout Junior campaign, I would put Francis as a D2 Prospect with the possibility of attracting LM D1 interest if he continues to develop his accuracy as a shooter and increases his exposure.

I was able to see Walker play the first time last July at The Fullcourt Press Pangos All-West Camp hosted by Dinos Trigonis. Walker’s style of play stood out and I have been fortunate to see him in various formats (individual events and with his high school team). The best way to describe Walker’s game is silky smooth. Walker never looks pressured or out of control and knows how to adapt to his role on the court depending on who he is playing with. Walker is a true lead guard that is a really good playmaker with the ability to create his own offense. Walker has smooth handles and is shifty on the move to evade defenders and open up scoring opportunities. Walker has a pretty release on his shot and is a consistent threat from beyond the arc. Walker has a good feel for the game and knows when to facilitate and when he needs to look to score. Fundamentally sound defender that allows him to play good on ball defense even against taller guards. Currently a D2 Prospect with interest from a few programs. Solid student that could help market his game to higher academic (D3) programs.

Watts has been a player that has been known in the Central Section since middle school. He played AAU ball with Fresno Next Level, which was a Top 15 14U program on the West Coast. Watts has always been a physical presence in the post and knows how to use his strong physique to impact the game on both ends. Watts has solid footwork, is a really good rebounder, uses his strength to bully his way to the basket, plays well with his back to the basket and his agility allows Watts to feel his defender and spin away for easier scoring opportunities. Watts has a nice mid-range game and has become a more consistent threat from the mid-post. Watts has improved his ball handling skills and uses this to get his defender to spots where he feels more comfortable making his move. Watts does have the ability to hit from beyond the arc but could really improve his recruitment if he was more consistent from deep. Watts is a D2 Prospect but may benefit from going the JUCO route to develop his all around game.

I had seen Gaspar play once before he attended the Prospect Workouts, back in December at a tournament hosted by Immanuel HS. However, I did not recall much of his style of play so was interested to see him play. I looked up his stats from the season and he had numerous games scoring 14 points or more. By game two of 5 v 5 play, Gaspar started to get warm and comfortable with his teammates. Gaspar is a really good shooter from three point range and reads the floor well and gets to open spots for catch and shoot opportunities. Offensively, Gaspar showed to be somewhat of a specialist from deep but that does not fully define his game. Scrappy on the court and active on the glass, Gaspar is a good rebounder and does not force the ball back up but is good at controlling the ball and kicking it out to the ball handlers to reset play. Plays the game with a tough mindset, goes after loose balls and once he settled in competed on every play. JUCO Prospect that could play NAIA ball if he develops more guard skills that translate to a four year program.

Esparza was not a player that jumped out at me when he showed up at the Prospect Workouts. I watched him through the skills portion of the Workout and he had all the skills you would want to see in a point guard but when play started I got a much better look at his game and was pleasantly surprised with his ability to impact a game in various ways. Esparza is a good ball handler but played off the ball more than on ball during 5 v 5 runs. Esparza has a really nice shooting form and can knockdown the 3 ball and takes advantage of open shots from mid-range. Esparza is one of those hustle players that wins 50/50 balls, applies good pressure on defense, is a sneaky rebounder for being a guard and has a nice feel for the game. Esparza made it out to two of the Workouts, which was nice because by the 2nd Workout you could see he was much more comfortable with the format and getting involved on both ends from the jump. Esparza is a tough minded player that has great body language and just plays the game. Esparza is likely a JUCO Prospect but has the potential to pursue NAIA programs. The main thing that will determine his play beyond high school will be exposure and he has already reached out about how to increase his value as a prospect from a small school in the Central Section.

I have been fortunate to be around Angel a lot the past few years, as he plays for the school where I am the Assistant Coach. Mejia has great on court speed and when he attacks the basket it is tough for a defender to stay in front of him. Mejia plays flashy and that has led to inconsistency in the past but he has been working on his game a lot since the end of last season and it showed at the Prospect Workouts. Mejia has become a much more reliable ball handler, has gotten better at taking the straight line path to the basket instead of pulling a tough contested shot, and really has improved his court vision. Given Mejia’s quickness and ability to break down a defense, I was most impressed with his passing ability and playmaking. Mejia had about 5 dimes that were not part of his game just a few months ago. Mejia realizes that when the defense collapses there are open reads and he is finding them with more accuracy because he has improved his handles and is playing with his head up. If Mejia continues to work on his game and buys into being a solid 2-way player he could boost his stock as a prospect from NAIA/JUCO to potentially a D2 Prospect.

RT @RyanSilver1: Happy Birthday to my brother, best friend, mentor and Basketball legend Greg Kristof @greg_zg. Thank you for all you do f…

RT @RyanSilver1: Tired of being fat... Down 50 lbs. Gallon of water a day, 20,000 steps and weights and Pilates with @deniselovespilates .…

RT @JalenEncinas: Thankful for the opportunity to showcase my talents during the @WCEBball Exposure Camp in Sacramento. Thank you @SilverWa…

Congratulations to Jeremiah Donati of TCU on becoming one of the most impactful Division I ADs in the country https://t.co/h1muIote2Y

Congratulations to John Swarbrick of Notre Dame on becoming one of the most impactful Division I ADs in the country https://t.co/I6W0yrdUHN

Congratulations to John Wildhack of Syracuse on becoming one of the most impactful Division I ADs in the country https://t.co/1yFg2kYkjC

Congratulations to Keith Carter of Ole Miss on becoming one of the most impactful Division I ADs in the country https://t.co/etijAE1ZZu

Congratulations to Ray Tanner of South Carolina on becoming one of the most impactful Division I ADs in the country https://t.co/1cL0c55drZ

Congratulations to Mark Coyle of Minnesota on becoming one of the most impactful Division I ADs in the country https://t.co/QEZ6khCtIE

Congratulations to Amanda Howett of Penn State on becoming one of the most impactful Division I ADs in the country https://t.co/HlPPucd8cI

Congratulations to John Cohen of Mississippi on becoming one of the most impactful Division I ADs in the country https://t.co/62jZU93Gh1

Congratulations to Joe Castiglione of Oklahoma on becoming one of the most impactful Division I ADs in the country… https://t.co/VPJKG4WyYV

Congratulations to John Mack of Princeton on becoming one of the most impactful Division I ADs in the country https://t.co/UNgGEVeh0u