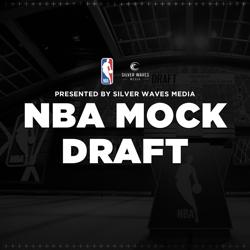 As the original date of the 2020 NBA Draft approaches, Silver Waves Media contributor and NBA Specialist Aaron Pearlstein gives the first look at what we can expect come October 16th. Here we take a look at who Pearlstein sees going top three and why in the SWM NBA Mock Draft.

Coming in at the number one spot is James Wiseman of Memphis, which comes at no surprise to anyone. Pearlstein writes, "With a 7'6'' wingspan, James Wiseman can produce for a team right away on both sides of the court. His three-point shot has improved since HS as well, and if he continues to improve in that regard, he could become the next all-around big man to take the NBA by storm."

Following Wiseman to take the number two spot is former Georgia Guard Anthony Edwards. Pearlstein write, "His play at Georgia led him into the first overall pick conversation as he displayed elite athleticism, an ability to shoot the three ball, and play multiple positions due to his 225 lb frame." With this, Pearlstein adds that a possible concern with Edwards is his motor and streaky shooting down the final stretch of the season, which may contribute to him missing out on that number one spot.

With the third pick of the SWM NBA Mock Draft, Pearlstein selected Lonzo Ball. Ball already has pro experience and has been in the spotlight for much of his young basketball career so no surprises here. On Ball Pearlstein writes, "Ball is a 6'7'' point guard with the ability to set up his teammates and score the ball from inside and outside the arc. His positional flexibility on the offensive end is unmatched in this class, and his shot creation has an incredibly high ceiling."

Aaron Pearlstein, 20, is currently a sophomore at Tulane University where he acts as the Manager for the Men's Basketball Program. He has experience with high level college and NBA scouting for organizations such as BPA Hoops & fanteractive.com

🚨 Monday Moves 🚨 Since appearing on our Top 50 Most Impactful Mod Major Assistants list in 2020, Antoni Wyche has… https://t.co/SBCqzwb3o4

🏀 Monday Moves 🏀 Since making our 50 Impactful Mid Major Assistants list in 2020, Gus Argenal has moved on from C… https://t.co/52YEuHsPOm

RT @Coach_Delus: Thank you at @SilverWaveMedia for recognizing our Lady Eagles in your annual class ranking list. We greatly appreciate it.…

Aaron talks about that he need to work on switching ability though. Opponents turn ball over against him in the pos… https://t.co/n27iRR4Vf0

Big board spotlight: Mouhamed Gueye out of Washington State is #34 on our NBA guy Aaron Pearlstein’s board right no… https://t.co/y89QmN1elk

RT @pearlsteinaaron: Opponents turn ball over against him in the post 14.3% of the time but score 63% of the time on perimeter. This one is…

RT @pearlsteinaaron: Big board spotlight: Mouhamed Gueye out of Washington State is #34 on my board right now. The uber-athletic big man is…

🚨 We’re Hiring 🚨 We are looking motivated interns who are looking for experience in the sports media Industry. DM… https://t.co/tFTMzng0D6